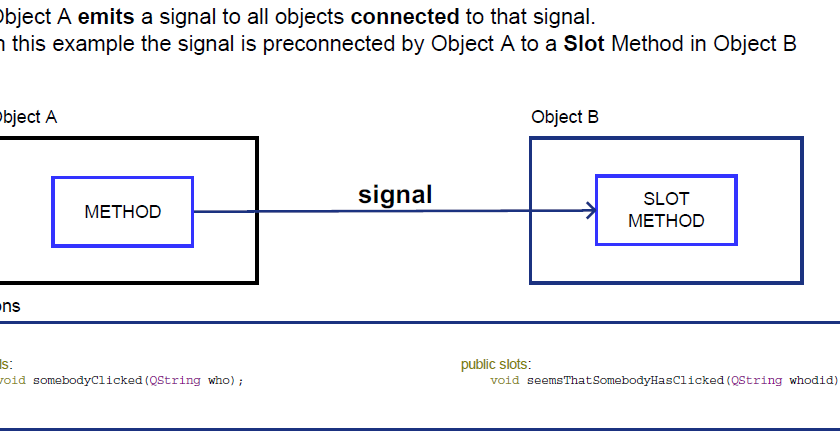 This will emit the second signal immediately whenever the first is emitted. The QObject -based version has the same internal state, and provides public methods to access the state, but in addition it has support for component programming using signals and slots.

This class can tell the outside world that its state has changed by emitting a signal, valueChanged , and it has a slot which other objects can send signals to.

They must also derive directly or indirectly from QObject. Slots are implemented by the application programmer. Here is a possible implementation of the Counter::setValue slot:.

The emit line emits the signal valueChanged from the object, with the new value as argument. In the following code snippet, we create two Counter objects and connect the first object's valueChanged signal to the second object's setValue slot using QObject::connect :.

Note that the setValue function sets the value and emits the signal only if value! This prevents infinite looping in the case of cyclic connections e.

By default, for every connection you make, a signal is emitted; two signals are emitted for duplicate connections. You can break all of these connections with a single disconnect call.

If you pass the Qt::UniqueConnection type , the connection will only be made if it is not a duplicate.

If there is already a duplicate exact same signal to the exact same slot on the same objects , the connection will fail and connect will return false.

This example illustrates that objects can work together without needing to know any information about each other.

To enable this, the objects only need to be connected together, and this can be achieved with some simple QObject::connect function calls, or with uic 's automatic connections feature.

If you use qmake , the makefile rules to automatically invoke moc will be added to your project's makefile.

Signals are emitted by an object when its internal state has changed in some way that might be interesting to the object's client or owner.

Only the class that defines a signal and its subclasses can emit the signal. When a signal is emitted, the slots connected to it are usually executed immediately, just like a normal function call.

When this happens, the signals and slots mechanism is totally independent of any GUI event loop. Execution of the code following the emit statement will occur once all slots have returned.

The situation is slightly different when using queued connections ; in such a case, the code following the emit keyword will continue immediately, and the slots will be executed later.

If several slots are connected to one signal, the slots will be executed one after the other, in the order they have been connected, when the signal is emitted.

Signals are automatically generated by the moc and must not be implemented in the. They can never have return types i.

A note about arguments: Our experience shows that signals and slots are more reusable if they do not use special types.

Connecting different input widgets together would be impossible. A slot is called when a signal connected to it is emitted.

However, as slots, they can be invoked by any component, regardless of its access level, via a signal-slot connection.

Compared to callbacks, signals and slots are slightly slower because of the increased flexibility they provide, although the difference for real applications is insignificant.

In general, emitting a signal that is connected to some slots, is approximately ten times slower than calling the receivers directly, with non-virtual function calls.

This is the overhead required to locate the connection object, to safely iterate over all connections i.

While ten non-virtual function calls may sound like a lot, it's much less overhead than any new or delete operation, for example.

As soon as you perform a string, vector or list operation that behind the scene requires new or delete , the signals and slots overhead is only responsible for a very small proportion of the complete function call costs.

The simplicity and flexibility of the signals and slots mechanism is well worth the overhead, which your users won't even notice. Note that other libraries that define variables called signals or slots may cause compiler warnings and errors when compiled alongside a Qt-based application.

To solve this problem, undef the offending preprocessor symbol. The meta-object contains the names of all the signal and slot members, as well as pointers to these functions.

The meta-object contains additional information such as the object's class name. You can also check if an object inherits a specific class, for example:.

It's not obviously relevant to the moc, but if you inherit QWidget you almost certainly want to have the parent argument in your constructor and pass it to the base class's constructor.

If on the other hand you want to call two different error functions when the number overflows, simply connect the signal to two different slots.

Qt will call both in the order they were connected. A slot is a receiving function used to get information about state changes in other widgets.

LcdNumber uses it, as the code above indicates, to set the displayed number. Since display is part of the class's interface with the rest of the program, the slot is public.

Several of the example programs connect the valueChanged signal of a QScrollBar to the display slot, so the LCD number continuously shows the value of the scroll bar.

Use QSignalSpy to verify signal arguments. They describe an event or change of state that has occurred. Slot names are imperative verbs and describe an action to be done: clear, setDate, etc.

Thanks for this. It solved a problem I was having with signals and slots Calling the signal in the constructor before I had connected them.

I came across this post trying to figure my problem out. Ensure the receiving objects you connect to are not getting destroyed before their slots can get called.

Thanks for the post. I have verified this with the qDebug ;. Thank you very much for the post. Excellent advice and has helped me out of more than one bind at this point.

Creating it with the new keyword fixed the problem.. Seems obvious but I put my single instance code at the top of my main and then had a heck of a time figuring out why nothing was emitting signals.

Can you tell why this is. I need lineUpdated to work as the info I want is in the Line object — but will only be populated once the lineUpdated signal has fired.

Thank you for this great article! On my browser, the formatting seems to get garbled after point It took me ages to realise that I needed to specify the parameters types of signal and slot in the connect statement.

The reason, the compiler cannot spot errors is, that the plumbing underneath the signal-slot infrastructure is based on tables with character strings as the keys.

The implementation makes heavy use of templates, and errors the compiler can spot, lead to insanely cryptic error messages.

Plus, the syntax for using overloads lost succinctness, requiring an additional cast operator. The current state of affairs is still: Signals and slots are convenient, easy to get wrong, and nigh impossible to debug.

There was no warning. It just ignored the connection. OH yes! Unfortunately I found this comment only after fixing the issue.

It would be nice to put the qRegisterMetaType it on the list above! However, bugs do happen, on occasion. I was hoping to find either one in this article.

This is not the case, however, and when things break you are still left with a call stack, 70 levels deep, without the slightest clue, how you got there.

These are common scenarios in any Qt project. Is it really impossible to effectively debug Qt applications, or am I just missing the tools and strategies?

I would add another issue I encountered. It looks fine at first, BUT there are double parentheses around the parameters, and for some reason that made my signal obsolete and never fired.

Hope that helps people. After all the other 24 points from this page were correct and quite some hours, I discovered this finally….

Reblogged this on Qamar-ud-Din. I required the classes that the template supported to conform to the same interface e. Then I had to overload the prototypes with each different datatype.

I think I ran into problems sometimes when the order of a non templated slot came after the templated slots resolved by placing before the other ones.

Anyway, pretty tricky, but works well. I think the qt stuff is still a bit buggy somehow. Ten years later, you have saved my ass! Could you explain why is 4 a thing?

Also thank you for your content. Make sure the the classes are initialized before adding signal and slot.

My scenario : in my case i used two different ui forms and prompted the widgets into mainwindow.. I tried to connect them using signals and slot..

Notify me of new posts via email. This site uses Akismet to reduce spam. Learn how your comment data is processed. Skip to content. 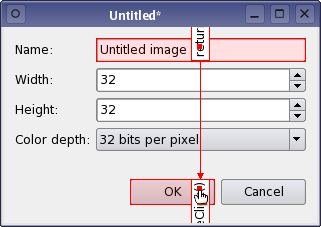 4 thoughts on “Qt Signal And Slots”